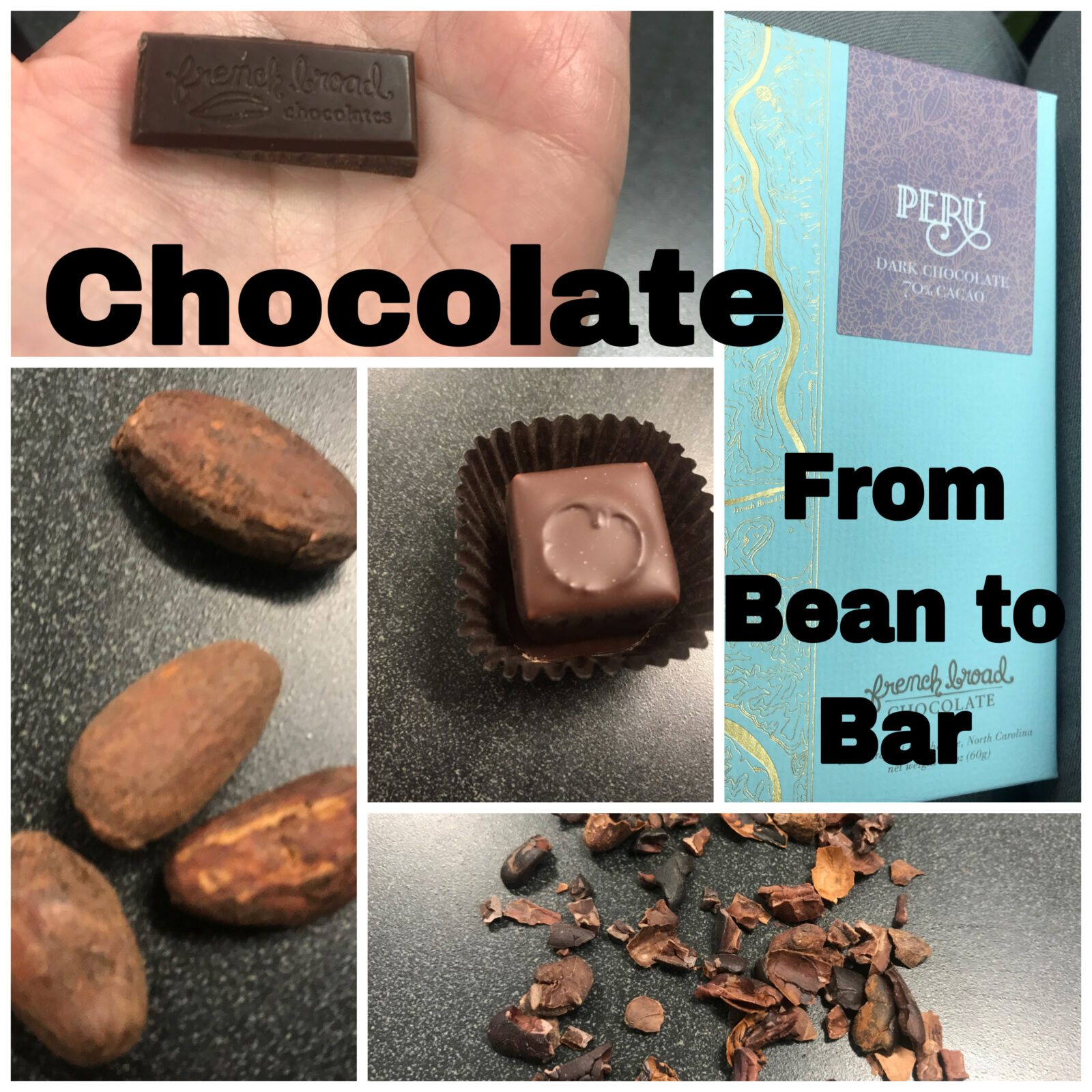 Traveling the United States this January, we found ourselves on a rainy day touring a chocolate factory and were wowed by the similarities of the cacao bean with the coffee bean.  Learn how chocolate is made from cacao bean to chocolate bar.

We stepped into the French Broad Chocolate Factory in Asheville, North Carolina for our BOGO 30-minute tour Monday afternoon.  The smell was amazing and I kept thinking I would love to work in a place that smelled like this all the time.

The little café greeted us with its chocolate delights, ice creams, coffee, lattes, and chocolate snacks.  We found a table to linger after we ordered a coffee, hoping the coffee would wake us up from the afternoon rain.  If the coffee wouldn’t work the chocolate aroma was definitely working.

In a few minutes, our tour group was assembled and one of the baristas gave us an educational tour about chocolate.   If you know me, I love chocolate, especially dark chocolate.  Now that I know how much effort goes into making good chocolate, I love it even more.  The price is what holds me off from eating too much.

The tour guide asked us all where we lived.  After we told her Minnesota, she said, “The founders and owners of this company went to the University of Minnesota”.  She said they dropped out of Graduate School and converted a school bus into an RV and drove to Costa Rica to pursue chocolate.  They first started selling chocolate baked goods in their store in Costa Rica called Bread and Chocolate.

The couple Dan and Jael eventually purchased a plantation and started growing their own cacao. It took seven years of full growth before they could start making their own chocolate from their cacao beans. Most of what they learned was from the people and farmers in the area.

After their success there, they moved to Asheville, NC and opened up multiple shops and their recent enlarged factory next to the Broad River in Asheville is where they give tours, provide taste-testing and make chocolate bars and bonbons. French Broad Chocolate Link.

Cacao Beans are grown on trees as pictured and are considered a tropical rainforest plant. The cacao belt is 20 degrees north and south of the equator.  The pods are harvested in a variety of colors and dried. After opening the pod, the cacao beans inside need to be fermented and dried.

(Pictures have been taken of the pictures, models or samples on the tour with permission.)

During the tour, we were able to taste chocolate from Peru, India and Nicaragua and each of them had a unique flavor.  Just like coffee, the cacao takes on the flavor of the environment where it is grown.  They can have a fruity flavor, nutty flavor or earthy flavor.  All of the flavors are shown on this wheel displayed in their factory.

How Chocolate is Made

Just like coffee, the cocoa beans need to roast at high temperatures for the nibs to be separated and their flavors to be exposed.   After roasting, the bean is broken and the cacao nibs are separated from the shell.   The nibs are what are used to make chocolate.

The nibs are then heated and pressed with special machines to take away the debris and separate the cocoa and cocoa butter.   The chocolate liquid comes out and is mixed with ingredients such as milk or sugar. White chocolate is made from the cocoa butter extracted from this process.  Dark chocolate has a higher cacao content and less added ingredients than milk chocolate.   The chocolate from Peru we tasted contained 72% cacao.  A Hershey bar contains only 11% cacao.

The factory makes chocolate bars from their chocolate with no preservatives.  They are made from beans around the world they purchase or from their own plantation in Costa Rica.

From their chocolate, they also make fresh bonbons that have a variety of creative, preservative-free ingredients in them.   We sampled some of the bonbons on our tour, but for myself, I prefer the chocolate squares and chocolate chips they make.

Finally, If I don’t leave you with the nutrition facts of chocolate, something would be wrong.

Dark Chocolate contains around 7-11 grams of fiber depending on the size, iron, magnesium, copper, and manganese.   It also has potassium, phosphorus, and zinc.

When you get a craving for chocolate it could be because your body is low in magnesium. Nuts would also help with that craving too.

Cocoa butter is the fat separated from the cacao.   Cocoa butter contains about 2/3 saturated fat and 1/3 monounsaturated fat.   Chocolate and Cacao contain many antioxidants such as flavanols, catechins, and phenols these are great for cancer prevention as well as many other functions in the body.

Enjoy your Chocolate one square at a time. The darker and more Cacao the better.  Something I say all the time is, “It’s not worth the calories unless it’s chocolate.”

If you are ever in the Asheville, North Carolina area or an area that makes chocolate from bean to bar, make sure you take a tour and learn how it all works. It will be worth it for the taste testing and the smells.

Grab some chocolate for your sweetheart this winter and remember its always the best in moderation, one square at a time.

If you would like to stay updated on my 130 days Sabattical Travels in the USA. Follow my blog at dabillaroundthetable.com in the subscribe form at the bottom of the page or in the sidebar on your computer. Emails will be delivered to your inbox once a month with links to recent blogs.

1 thought on “How Chocolate is Made: From Bean to Bar”